Posted on January 4, 2013 by seattlehealthyworkforce 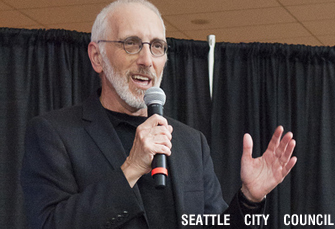 Congratulations to Seattle City Council member Nick Licata, who was named The Nation Magazine’s “Most Valuable Local Official” on the Progressive Honor Roll of 2012. The Nation cites his progressive credentials, including his sponsorship of Seattle paid sick days ordinance, as a reason for the award.

“…Licata has practiced local politics since 1998 as a bold advocate of progressive populist ideas. He was a sponsor of Seattle’s innovative paid-sick-leave law, and he’s been in the forefront of fights to prevent corporations and wealthy sports team owners from gouging taxpayers.”

Congratulations to Nick on winning the award!

The Seattle Coalition for a Healthy Workforce is a diverse coalition of businesses, faith-based, labor, family, and community groups. We’re working to ensure everyone has paid sick days, so we can all have safer food, healthier families and more productive workplaces.
View all posts by seattlehealthyworkforce →
This entry was posted in In the news and tagged nick licata. Bookmark the permalink.